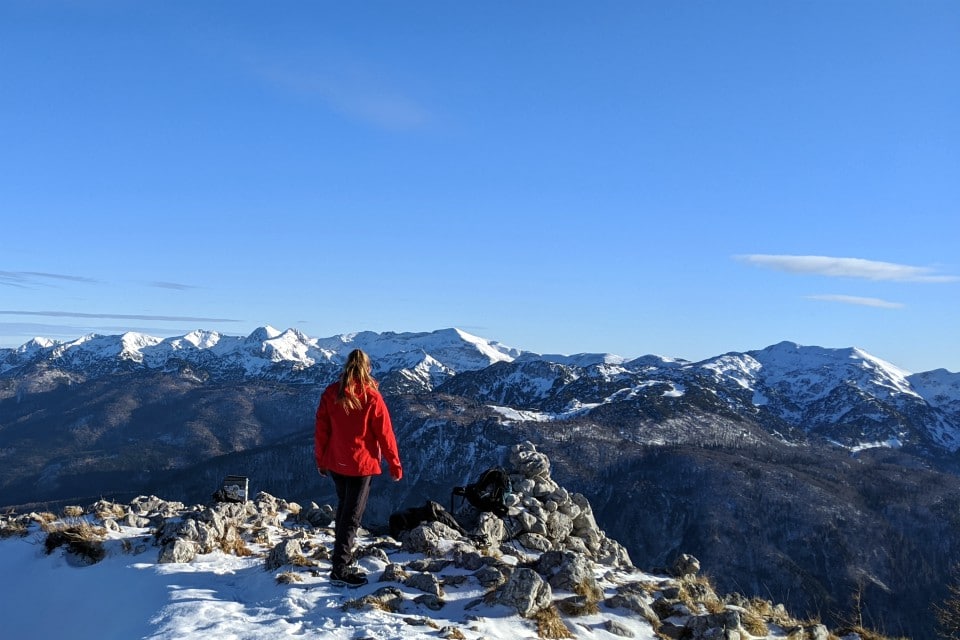 From the north shore of Lake Bohinj, rocky cliffs rise dramatically to the 1,761m summit of Pršivec. The views from the top across the Julian Alps and down to the lake are spectacular. Having hiked up Pršivec in summer and autumn, we wanted to try a winter visit. This year’s winter has been unusually mild. Heavy snow has fallen on the high peaks, but only short-lived flurries have made it lower down into the valley. This meant much of the approach would be clear, with only the higher, north-facing slopes likely to be under snow.

There are three main routes up Pršivec and we linked two of them to perform a traverse. Our ascent would be from the Slap Savica hut (653m) at the western end of Lake Bohinj. This offers the quickest ascent, a key consideration with the short winter days. The descent would be along the ridge to the east, via Vogar and home to Stara Fužina.

From the car park at Slap Savica, the hike climbs up the Komarča wall, signposted to Črno jezero (Black Lake). As you gaze up at the imposing rock, it is hard to imagine a path could cut a way up. However, it is a well-marked route, with red-white dots showing the way. You quickly gain height… and tired thighs! Teasing views of the lake and the hamlet of Ukanc through the trees give a
taste of what will follow.

The Komarča path has recently been repaired and there are steel ropes and pegs to help you in exposed areas. It is not advisable to climb this route in snow – it is steep and exposed, and accidents do happen. The warmth of this winter had melted the snow and ice, so our ascent was completely clear. 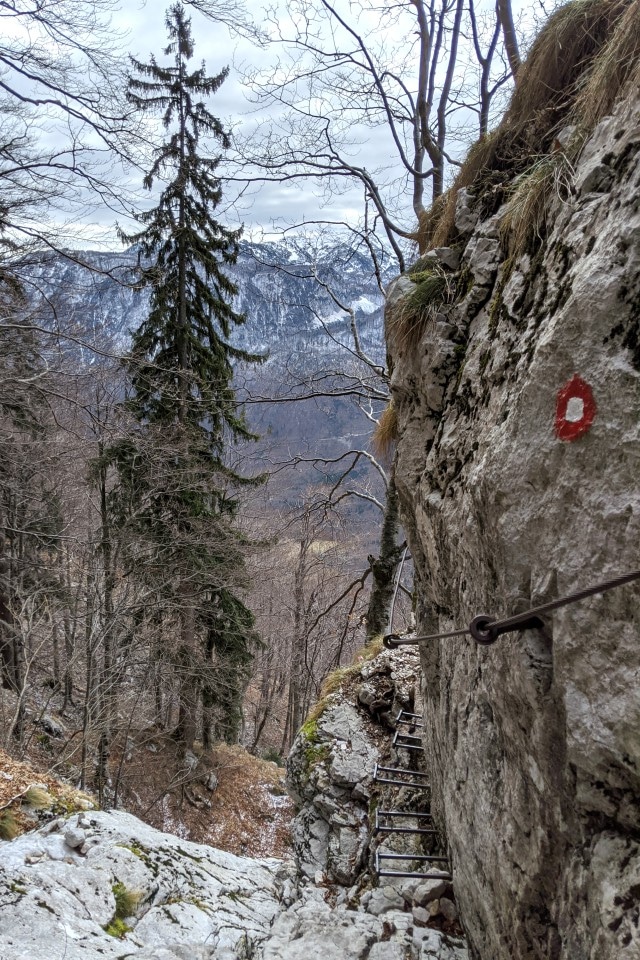 After 1.5 hours, we reached the top of the climb. From here, the path headed through a snowy forest to the lowest of the Triglav Lakes, Črno jezero (1,294m).

The Triglav Lakes Valley, protected since 1924, is considered one of the most beautiful parts of the Julian Alps. Although there are ten lakes, it is generally called the Seven Lakes Valley as three dry up during the year.

Črno jezero is the warmest of the Seven Lakes, being shallow and at a lower altitude. It is 150m long, 80m wide and its depth varies considerably with rainfall. Despite its name, the water is not black, but it reflects the dark pine forest which encircles it. The Alpine Newt, endemic to the Alps, lives here – they clearly don’t mind the cold water! Water from the lake drains through underground passages, feeding Slap Savica (waterfall), from where it flows into Lake Bohinj.

Because no river flows out of Črno jezero, there is no river bed to set the height of the water. We have visited at different times of year and it is noticeable how much the water level changes. On this visit, the winter conditions strikingly highlighted the fluctuation. Collapsed slabs of ice, formed on a full lake, surrounded the now lower, shrunken, surface of ice in the middle. 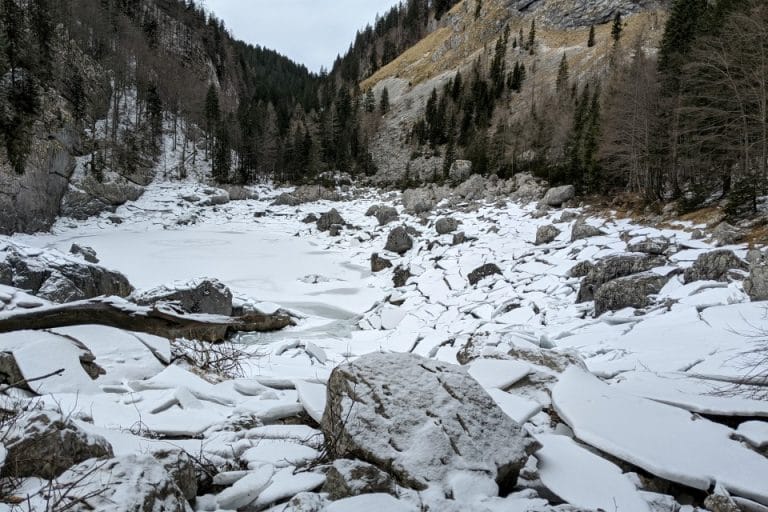 In the solitude of the mountains, it looked and felt otherworldly. Leaving Črno jezero, the next stop was Planina Viševnic (1,615m), a beautiful alpine pasture that in summer feels like a scene from Heidi. Log cabins are dotted among lush meadows, with high mountains all around, making it a popular hike in summer. There is a charming alpine hut here, open in summer for refreshments and lunch.

In winter, it is a different story. The red-white blazes, often painted on low rocks, were blanketed by thick snow, slowing our progress. Our prior knowledge of the area, having hiked the trail before, was invaluable in helping us establish the route. The ground turned from earth to snow and then to ice, so we put on our crampons. 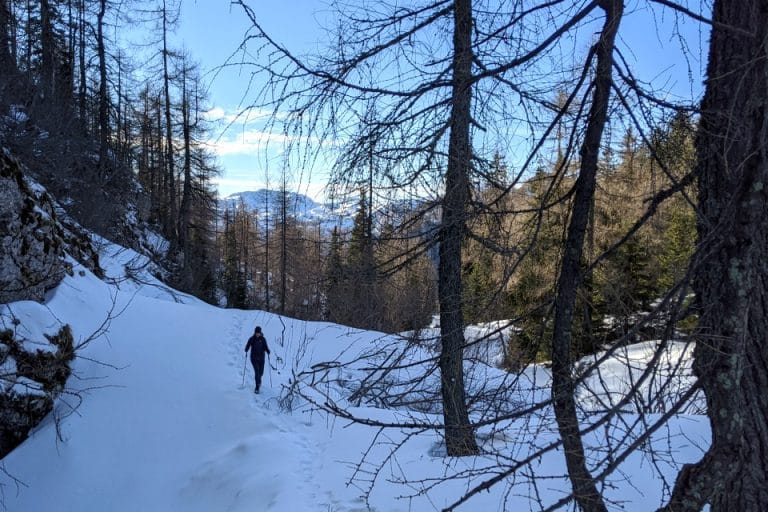 From Viševnik, a path winds up through the forest, opening quite suddenly onto to the summit of Pršivec (1,761m). Here you get panoramic views of the Bohinj Valley and Mount Triglav, Slovenia’s highest peak at 2,864m, seen on the right in the photo below. 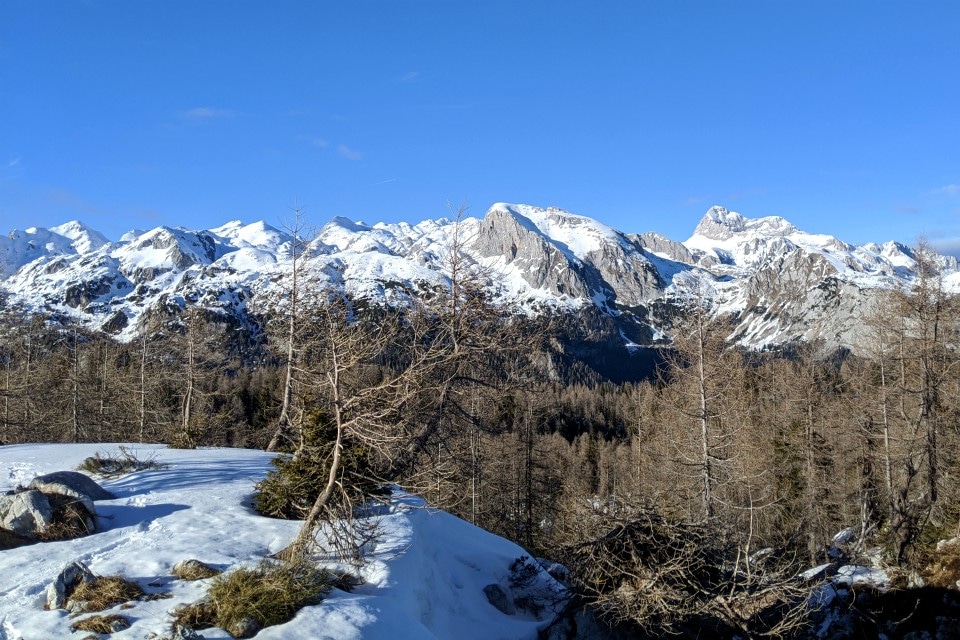 It is a challenging climb to the top of Pršivec, but the reward is fabulous, with views up to Triglav and down to Lake Bohinj, glistening in the sunshine 1,250m below. 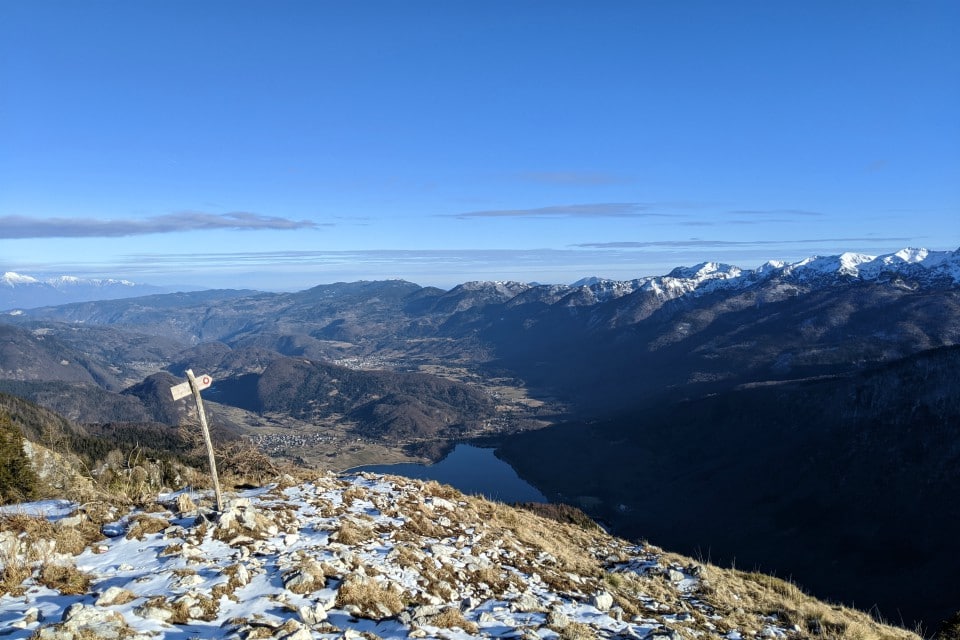 As with most Slovenian mountains, there is a visitors’ box here with a rubber stamp. Bring your own inkpad and paper to make a souvenir of the occasion!

We could have spent more time admiring the amazing views, spotting other peaks and breathing in the crisp mountain air. However, in February, the daylight hours are limited, so we had to start the descent. The path down the eastern side is quite steep in places, but our crampons dug in securely, keeping us safe. Here again, it was hard to find the path, so knowing the route was very helpful.

The Descent to Stara Fužina

45 minutes after leaving the summit, the snow thinned and the path became clearer as we headed towards Vogar.

Vogar  (1,054m) provides another super viewpoint over Lake Bohinj. It is a popular hiking point, detailed in our Blog post here. On clear days, it is also a paragliding take-off point. There is a mountain hut where you can get a coffee or beer, depending on your need! In winter it is usually open only at weekends, so best to check in advance if you are relying on it for food. From here, we watched the sun set over the mountains before heading down to Stara Fužina on the clear path. 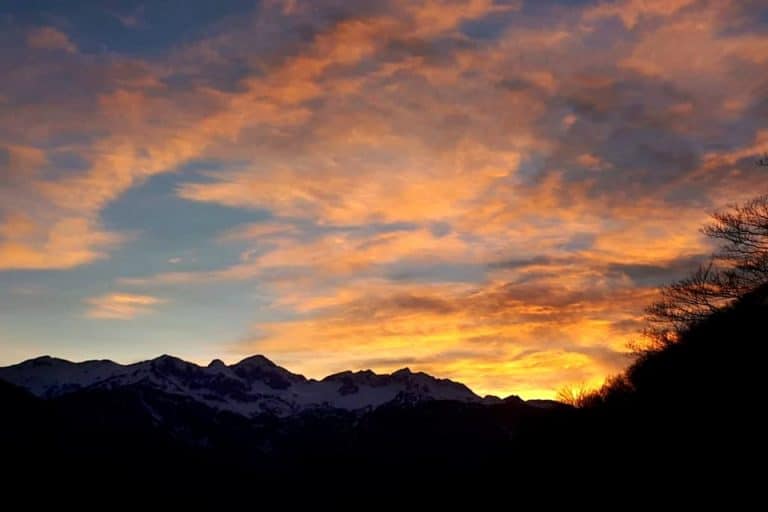 We had a wonderful hike up Pršivec, grateful that the warm spell provided an opportunity to hike up high. There is something completely wonderful about the solitude and stillness of hiking in winter. You can feel the warmth of the sun on your back, yet snow covers the peaks all around. We did not meet a single other person between leaving the Savica hut and returning to our home, Pr Méžnarjo. It was just us, and the mountains. 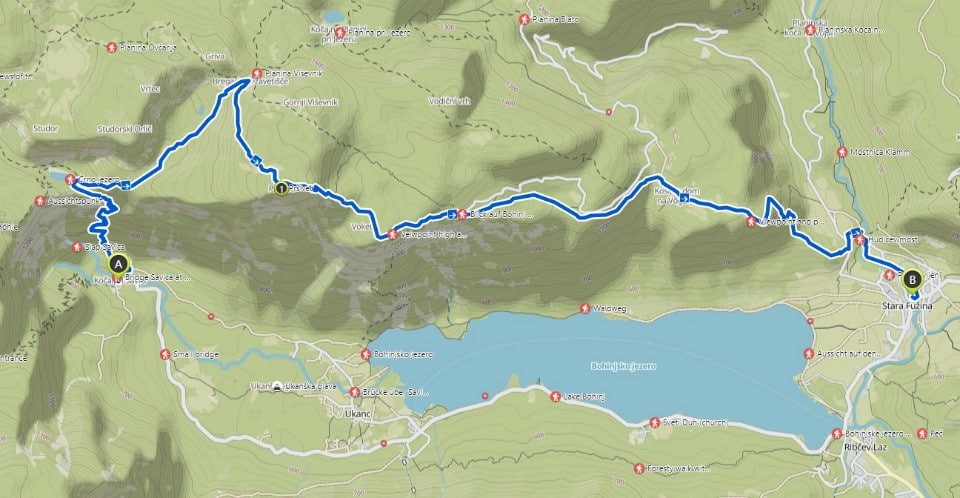 Mountain hiking at any time of year can be dangerous, and winter brings additional risks. Always make sure that you are prepared and do not exceed your own abilities and experience. Remember:

This is not a definitive list – you are responsible for your own safety in the mountains.

We use cookies on our website to give you the most relevant experience by remembering your preferences and repeat visits. By clicking “Accept All”, you consent to the use of ALL the cookies. However, you may visit "Cookie Settings" to provide a controlled consent.
Cookie SettingsAccept All
Manage consent

This website uses cookies to improve your experience while you navigate through the website. Out of these, the cookies that are categorized as necessary are stored on your browser as they are essential for the working of basic functionalities of the website. We also use third-party cookies that help us analyze and understand how you use this website. These cookies will be stored in your browser only with your consent. You also have the option to opt-out of these cookies. But opting out of some of these cookies may affect your browsing experience.
Necessary Always Enabled
Necessary cookies are absolutely essential for the website to function properly. These cookies ensure basic functionalities and security features of the website, anonymously.
Functional
Functional cookies help to perform certain functionalities like sharing the content of the website on social media platforms, collect feedbacks, and other third-party features.
Performance
Performance cookies are used to understand and analyze the key performance indexes of the website which helps in delivering a better user experience for the visitors.
Analytics
Analytical cookies are used to understand how visitors interact with the website. These cookies help provide information on metrics the number of visitors, bounce rate, traffic source, etc.
Advertisement
Advertisement cookies are used to provide visitors with relevant ads and marketing campaigns. These cookies track visitors across websites and collect information to provide customized ads.
Others
Other uncategorized cookies are those that are being analyzed and have not been classified into a category as yet.
SAVE & ACCEPT
Powered by

Share this ArticleLike this article? Email it to a friend!
Email sent!